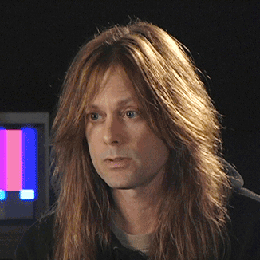 Rat Skates (born Lee Kundrat, on May 17, 1961 in Summit, New Jersey) is a filmmaker, writer and musician. He is most widely known as a director of music documentaries and his contributions to the thrash metal genre as the founding drummer of Overkill.

Overkill’s early success has been attributed to Skates’ songwriting presence and creative efforts. He was voted one of the top-ten drummers of 1987 by the Japanese publication Burrn!, and his drumming on the songs “There’s No Tomorrow” and “Feel the Fire” were the first recorded songs in the thrash metal genre to encompass non-continuous 16th note double bass drum patterns. The Overkill logo was drawn and colored lime green by Skates in 1981, and is recognized as one of the most famous heavy metal logos. He noted that when he removed the cross emblem from between the words in his original logo design, he never connected the two words “Over” and “Kill” together, and that is it was never resolved as being a one-word or two-word name, suggesting that Lemmy from Motörhead would know the answer. Skates declined offers to join Megadeth, M.O.D. and Mind Funk; he never attempted to return to Overkill and stated that his only regret was “being naïve to trust”.

Skates freelanced for the Suburban Cablevision television network as an audio engineer, live mixer and cameraman from 1988 to 1992; departing due to creative conflicts. In 1999, he studied digital audio production and non-linear editing from Trish and Chris Meyer, Jay Rose, and Adam Wilt, and designed and wrote advertising media for television, radio, print publications, performing arts societies, Fortune 500 companies, record labels and recording artists. As an independent filmmaker, he co-produced, edited and animated designs for the documentary Get Thrashed (2008, Lightyear/Warner Bros. Entertainment) and Born in the Basement (2007, MVD Entertainment Group), receiving twenty-one screenings in eight countries, winning six awards and pay-per-view broadcasting.

Skates conceptualized Rock-Un-Rold, a musician’s television talk show with colleague David Ellefson (bassist, Megadeth), and filmed a demo shoot at The Studio in New York City on October 28, 2007. They moderated two discussion panels of six recording artists and pitched an edited version to a Viacom representative who declined the concept due to the content being “too intelligent”. In response, Skates began filming interviews in 2009 for the documentary film Welcome to the Dream- The Rude Awakening of Rock Stardom for release by the MVD Entertainment Group in 2012. The films preview teaser excerpts interviews from Grammy-award winning guitarist Vernon Reid (Living Colour), Mike Portnoy (Dream Theater), Anvil, Jay Jay French (Twisted Sister), Karl Wilcox (Diamond Head), Dr. Patricia Basczcuk (Psychologist) and Robert J. Pisarek, Esq. (Attorney), and an excerpt from his commissioned work for Lynyrd Skynyrd. It is sponsored by the International Documentary Association.