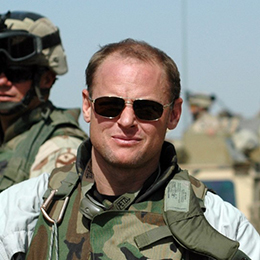 Michael Yon is a former Green Beret, native of Winter Haven, Fl. who has been writing from Iraq and Afghanistan since December 2004.  No other writer has spent as much time with combat troops in these two wars.  Michael’s dispatches from the frontlines have earned him the reputation as the premier independent combat writer of his generation.  His work has been featured on “Good Morning America,” The Wall Street Journal, The New York Times, CNN, ABC, FOX, as well as hundreds of other major media outlets all around the world.

Michael had previously written a critically acclaimed memoir, Danger Close.  He was authoring another book when two of his friends died on consecutive days in Iraq (one of them being Winter Haven native Scott  Helvenston).   Following accounts in the American press, Michael became concerned that we were losing the war.  At the same time, friends in the military said that the media was not telling the whole story.  Not wanting to take sides in the increasingly acrimonious argument over the war, Michael simply wanted to learn the truth for himself, and to write without fear or favor.  He decided to go to Iraq, financing his trip from his own pocket for more than half a year, then eventually receiving generous contributions from readers of his online magazine: MichaelYon-Online.com.  As early as February 2005, Michael described the violence in Iraq as a civil war.  In 2006, he said we were losing in Afghanistan.  In 2007, he was the first writer to claim the success of “the Surge.”  When he first voiced these opinions, they were extremely controversial.  Now they are conventional wisdom.

In 2008 Michael published his second book, Moment of Truth in Iraq, which is packed with exciting and heart-rending tales from the battlefields.

Even as main stream media is quietly pulling their reporters from Iraq in the wake of a weakened economy, Michael is preparing to return to Afghanistan in 2009, and from his observations and insight, Afghanistan is going to be much worse than anything we saw in Iraq and the conflict there could continue for decades.

Writing from a war zone is very rough on equipment, Michael is constantly having to have his equipment repaired and replaced. Without the continued support and contributions of readers it will be impossible for him to continue his mission in Afghanistan and writing on the victory in Iraq.