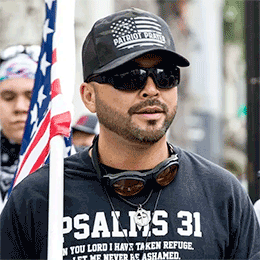 Joey Gibson is an advocate for freedom and believes it is imperative for followers of Christ to take the church into the streets, city councils, capitol buildings, courthouses, or anywhere we see injustices running unopposed including Hong Kong, China. Gibson believes that remaining silent is consent, and lives by the motto “Rebellion to Tyrants is Obedience to God”.

He has traveled the country giving speeches pleading with patriots and believers to stand now for he believes this is the last chance. Gibson has organized dozens of marches and rallies in support of free speech, gun rights, medical freedom, and sanctuary counties for the constitution. He has participated in numerous campaigns from the city level all the way up to the federal level and runs Public Relations for several advocates fighting for freedom.