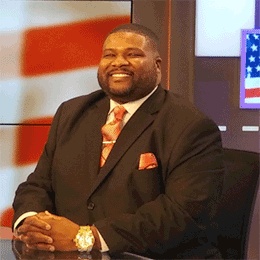 Edward Cage was born in St. Louis, Missouri. Raised on the city’s North side, he was faced with countless challenges, each of which he overcame. Edward’s teen years were full of pain and confusion, including becoming a father at the age of sixteen. He dropped out of high school and began to sell drugs, but, when so many of his old schoolmates were killed or locked up, Edward decided to make a change. He got a job at a sandwich shop. While working there he learned a great truth: he couldn’t read or write. Mad at the world generally white people specifically, he turned to Islam.

As he taught himself to read and write, he started to gravitate toward political and social issues facing the Black Community. This awareness helped him see life in America differently. Becoming a young father, he now had a vested concern about the state of America, especially Black America. After attending a meeting given by the Nation of Islam he became a Muslim. He felt that becoming a Muslim would put him on the right path. After four years he found it difficult to process the hate and lust for violence. The political system in Black America was not adding up to him. He started to question himself, others and the so call black leaders. He saw Islam as a problem, and began to view Islam as a hateful political system and not the religion of the black man or peace.

He stopped feeling sorry for himself, and walked away from Islam. Leaving Islam, he began focusing on the destructive agendas of the Democratic Party. He noticed a pattern of racism, hate and victimization the Democratic Party has imbedded in the minds of Black America. He noticed this to be a calculated plan from white liberals. Soon after leaving Islam, the Lord filled Edward with the Holy Ghost. With a new perspective on life, Edward could no longer keep silent. He began to speak out on issues affecting the Black Community, but from an unfamiliar perspective. He spoke against the established political and religion power houses of Black America. He quickly found himself standing along. He could no longer escape the question everyone was asking him “Are you a Republican?” Mr. Cage now confident in who he is, was ready to answer that question. But, first he had to attach another word to describe what he was. That word was Conservative. Now ready to answer the big question of if he was a Republican or not. With great understanding, Edward would tell people yes, “I’m a Conservative Republican.” This journey has taken him from liberalism to being a God-fearing, strong-minded, thought provoking, in-your-face Christian Conservative with an attitude. As Edward says, “Once I was able to read past a third-grade level with comprehension I never voted Democratic again, I ran with my wife and kids off the plantation to freedom.”