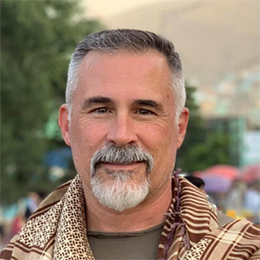 Chuck Holton is a former US Army Ranger, an international reporter, adventurer, businessman and most importantly, a husband and father of five homeschooled children.

In a typical year, Chuck visits over a dozen of the world’s hot zones, such as Syria, Afghanistan, Iraq, Venezuela, Lebanon, Somalia, Nigeria, and Chicago. His wealth of experience gives him a unique perspective on American culture, faith, and freedom.

Chuck hosted six seasons of his show “Frontlines” on the Life of Duty Network, his video dispatches are often featured on the Christian Broadcasting Network, and his nationally-ranked daily podcast “The Hot Zone with Chuck Holton.” He frequently speaks to churches and other organizations around the world on the topics of Biblical manhood, life structuring, adoption, homeschooling, and other charitable and patriotic causes. When he is not traveling, he splits his time between his farm in Appalachia and his home in a small village in the mountains of Panama.